The idea of this post is to provide a pattern that helps improve the performance of a complex information system that has very high cpu consumption and processing times. This pattern allows:

In the following diagram we have configured the mentioned system with a circuit breaker implemented as a WebLogic WorkManager that allows 20 concurrent threads serving requests in parallel for each server. In addition there is a coherence data grid in place that caches the information meanwhile data remains unchanged. 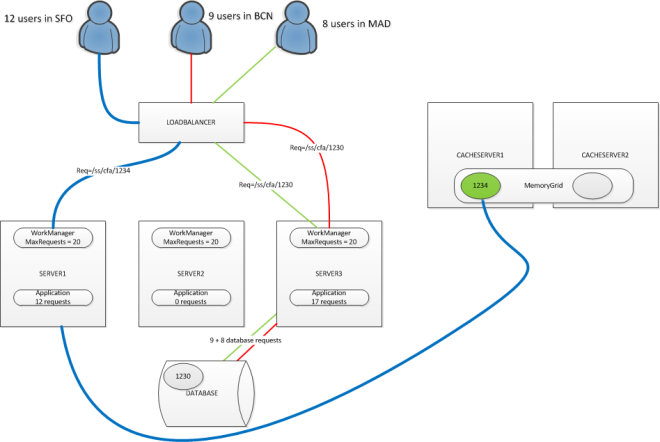 In addition let’s suppose the information for request /ss/cfa/1230 have just been invalidated in cache because several data has been changed at 11:59:59

As we can see the, effect of uncached info provokes response times 10 times longer than the cached requests just because this is a heavy processing system.

Let’s suppose we can manage requests on each sever in a way that the same request is only processed one time. Meanwhile the rest of equal concurrent requests are kept waiting until the information of the first request is retrieved.

In this situation server3 will process only one request of the 17 uncached concurrent that arrived at 12:00:00, the rest 16 will be kept sleeping until the unique request finishes and stores the result in cache. See following diagram.

So the calculation for the unique request is the result of the formula when there is only 1 request in place and is not cached:

When the unique request finishes, the rest 16 can be processed, but now they can get the result from cache, therefore the processing time is the sum of waiting time plus the time it takes a cached request:

Normally systems can process several request in parallel with constant response time while there are sufficient processors to dedicate for each request.

But when the number of requests is much more than the number of processors, response time increases because the scheduler starts to spread computer capacity to all the pending requests. This increase is proportional to

Overhead comes from pools schedulers, timers, context switches, memory management (pagination, caches,…), and all the stuff involved in multi-process/multi-thread computation. If the overhead is low compared with the processing time and the number of request is much higher than the number of cpus, response time is honoring a linear formula this way:

In general, when systems starts to saturate, overheads and internal processing comes to be significant, therefore the system is not working in the optimal constant/linear part of the response curve.